Vaccinated on the Anniversary of the Pandemic

On Thursday, 11 March 2021 I received my first vaccine to protect me from acquiring the disease COVID-19 in the event that I aim infected by the SARS-CoV-2 virus. 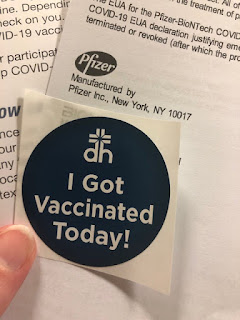 Because I received the Pfizer vaccine, I will receive the second vaccine in three weeks.

Two weeks after that (around Tax Day), I will achieve the maximum immunity provided by that vaccine. My husband is on a schedule for his vaccine just three days behind me.

I will always be able to remember the date of my first vaccination because it was the one-year anniversary for when the World Health Organization (WHO) declared COVID-19 had reached pandemic levels.

The media has published a variety of retrospectives, so I will refrain from making observations about society at large. I can report on my own situation with some authority.

Briefly stated, I have moved from vigilance to mania to information overload to worry to depression and now I feel an ember of hope.

I follow a lot of news sources, including global news, so last January and February, I was monitoring the outbreak in China and on cruise ships. I started to stock up on basics at home. I was raised in the Church of Jesus Christ of Latter-day Saints, which has instilled in me some knowledge and skill in emergency preparedness. I will say that because I was pro-active, we never ran out of hand sanitizer, Clorox (TM) wipes, toilet paper, flour, or yeast.

My husband had a trip planned in February to India. I begged him not to go because of all the intermixing of people within the several airports on his itinerary. Thankfully, the university cancelled the trip. He would have been stuck in India because of travel bans that were soon after announced.

My husband is a university administrator. He formed a task force, and they met frequently starting March to monitor CDC guidelines and apply them to the University of Evansville.

I was still monitoring news about the virus. By March, Washington State was reporting cases. I remember reading the Wikipedia entry daily when they were still reporting individual cases. I continued to stockpile cleaning supplies as well as protein powder, dried milk, canned goods and some dog food.

During the first week of Spring, our son flew home to visit, which he planned before the virus was spreading. I gave him a mask to wear on his trip home, but he left it on the counter believing that I was overreacting.  In April, one of his roommates invited someone to stay on their couch while in town for a wedding. That visitor tested positive for COVID-19.

My son got a PRC test that was negative, but he had seven symptoms in the days after that test (headache, low-grade fever, loss of appetite, fatigue, GI track deregulation, muscle ache), so I believe he did get COVID-19; he just was tested a little too early.

Southern Illinois University and University of Evansville (I teach part-time at both schools) started spring break on Friday 7 March 2020, so that is the day that I started my lockdown even though the state of Indiana didn't declare one for a while. My classes already had an online component, so I just moved everything online. I did not start Zoom until the fall. The students took online quizzes as usual. We just increased our use of online discussion boards.

In April, I improved my emergency supplies to include things such as seeds (to sprout) and a water filtration system.

Our daughter ended up coming home for the last month of school because Ball State University decided to close the residence halls. All their instruction had moved online.

Our teenage daughter was growing depressed and anxious from all the isolation, so we agreed that she could work at a local restaurant. We had to socially distance from her and restrict one of our bathrooms to her use only. This helped her manage her mental health more successfully.

Our son was working in Utah for Brick Oven, a restaurant that features pizza. Because of restricted dining, he kept being put on furlough. He spent his longest furlough with us in Indiana. This time he drove. At the end of July he got a job at a bakery instead. People where buying more food from grocery stores, so that provided more stable employment.

My husband spend several hours a day with the UE task force, setting up pragmatics and policies for fall semester. I spent a lot of time monitoring dashboards about our county, region, state and country. I listened to podcasts, read books, and created a Twitter account that followed hundreds of epidemiologists, microbiologists, public health officials, and science journalists. I also bought a lot of fabric for my mother-in-law, who was sewing masks for the 25 members of her clan (four sons and their family members).

My daughter returned to her college town (Muncie). She lives alone, but her boyfriend has five roommates. Four out of the six young men tested positive for COVID-19 that fall. This lead to my daughter getting tested about six times that semester.

When fall started, I did not have as much time to monitor cases, so I had to find ways to cope, especially when my daughter returned to campus in Muncie. I had to force myself to focus on what was within my control and what was not. The AAA Serenity Prayer became my mantra. I am very social, and I fell into a depression from lack of social interaction.  My husband is very introverted, and because he had very full days with university business, he spent his evenings self-soothing by listening to detective novels or playing chess via the Internet.

Our son was having trouble coping because of the stress of paying his bills and his lack of a support system in Utah. He was very compromised in creating a support group because of the pandemic. He was living in Utah County, home of BYU students and Utah Valley University students. There are thousands of single young adults there, but he could not socialize with them. He came home the week before Thanksgiving, which improved his mental health and mine.

I was teaching three classes, but I was spending 12 to 16 hours a day trying to make my Zoom classes as interactive as possible. I scheduled extra study halls, answered emails, met with students individually. The reports were that young people were suffering a lot, so I put their needs first. This created problems with my back until I got a standing desk. Then working long hours on my feet led to edema.  I wanted to ensure that I did everything in my power to support my students as a teacher and as someone directing them to student services. It was an exhausting semester physically and emotionally.

The holidays were bizarre. Our daughter kept having to postpone her visit to us because of frequent exposure to COVID-19. She came for three days between Thanksgiving and Christmas. We called it "Thanksmas," but we had a very modest celebration.

She spend Christmas with a high school friend who tested positive for COVID-19, which put our daughter in isolation for two weeks. She had to drop her hours at the Michael's craft store in Muncie. She had very few friends in town to deliver her food and other basics. I probably should have made the 5 hour drive up to drop things on her door, but she told me not to come. I mailed her several packages, but the delivery service was horrible giving the increased load due to the pandemic and the holidays.

I have been trying to connect with people over Zoom, but it's grown difficult. People are very busy just trying to get the basics done, so I stopped reading to children on Zoom and stopped texting most of my gal pals because I felt as though these interactions were becoming a chore. I wonder if I will end up being less social in my corner of the post-pandemic world?

I was only assigned one class for the Spring of 2021, starting in January, so work is not as exhausting. My depression is persisting.  We had a lot of snow and ice in February, which only compounded my depression.

Spring 2021 - Depression with a Side of Hope

I am still eating too many carbs and spending too many hours a day in bed binge-watching Netflix or YouTube videos. I'm trying to watch more documentaries. 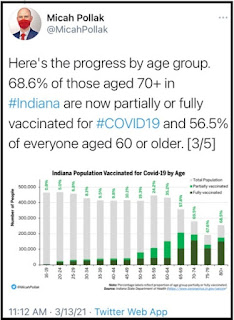 Thanks to the movie Dig (2021), I'm expanding my interest in archeology to learn more a lot about the Celts, Anglo-Saxons, Romans, Danes and Normans who invaded / immigrated to the United Kingdom.)

Starting the last week of March, I will be teaching 120 Chinese students how to write a basic college essay. That will keep me occupied.

Even though my energy levels as still low, things are looking up.

The rate of vaccination in the country is increasing. To the left is a bar graph about the state of Indiana. At the end of last week, 56.5% of everyone 60 or older in my state has been partially or fully vaccinated. Currently, those 50 and older are eligible for the vaccine.

The days are getting longer. The weather is nice enough that I went on a long walk along the Ohio River with my friend Susan Fowler, a local storyteller.

By the 4th of July, I am hoping to rejoin the gym once the rate of vaccination for this area is higher. (I don't want to bring the virus home from the gym and pass it on to my unvaccinated son.)

Group exercise classes has always been the best cure for what ails me -- body, mind and soul. When I can return safely to the gym, that will be a real milestone for me that I am on the recovered side of this pandemic.