Earlier this week, I saw that "animal crackers in my soup" was a trending topic on Twitter. Sure enough, this referenced a lyric from a song that Shirley Temple sung in the film Curly Top (1935). People were recalling a late-night commercial for a DVD set of her films.  (See IMDB for a list of her films.) This started me on a trip down memory lane.

In the late 1960s, my sister Julie and I would scour the TV Guide to see what movies would air on Sunday afternoons.  I remember watching a handful of Shirley Temple films on this lazy afternoons: Little Miss Marker (1934), The Little Colonel (1935), Captain January (1936) and a half dozen or so other films.

I was between 7 and 10 years old at this time--older than Shirley Temple but still mesmerized by her singing, dancing and acting abilities. I also enjoyed the props, costumes and fanciful dream sequences imbedded in many of her movies. 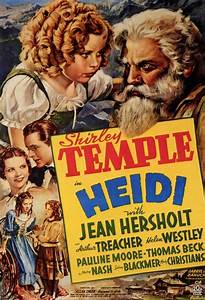 Two films, however, stood out to me the most. Heidi (1937) and The Little Princess (1939) were the two that I remember watching repeatedly, probably because I also enjoyed the corresponding books as well.

I remember sympathizing with this tiny protagonist and imagining all the highs and lows of her characters' story arcs: pining for her father, freezing in attics, crying out for her grandfather and so on.

My own situation may not have been as dire, but I certainly felt the depths of injustice as I experienced them at home.

My sister even acted out some scenes, such as the one in Heidi where Klara demonstrates how she has learned to walk with Heidi's help.

I also dreamed of having someone like the kindhearted Ram Dass neighbor instruct his servant to redecorate a little attic room with as much extravagance as the one in The Little Princess.  Here is a clip of the attic before it's filled with blankets, food, warm clothes and more.

What movies do you remember watching when you were a child? What movies did you imagine entering?