Below is a summary of an elder tale from Japan that features a mature woman using her wisdom to escape a difficult situation.

This year I'm summarizing one elder tale per month from various sources.  Usually, the protagonist of a fairy tale is a young person.  However, a handful of tales featuring older heroes have survived, and I think they are worth reading.

Going to the gym preserves my health and sanity.

At times, I have been hesitant to push myself hard while working out because of issues with bladder leakage.

A few weeks ago, I told my personal trainer, Melanie, that I didn't want to do jumping jacks.

She replied (in her drill sergeant manner): "Get some disposable underwear and quit whining!"

The next day, I received an invitation to review Depend Silhouette Active Fit briefs. That was a happy coincidence!

Working on brain health is vital to every person, not just for those coming back from a traumatic brain injury (TBI).

However, it was her own experience sustaining a brain injury in a car accident in November of 2003 that started Ruth Curran on her quest for greater knowledge and skill regarding brain health.

After having to look very closely at how her brain was relearning information, Curran accelerated her own recovery by earning a master's in psychology between 2004 and 2006 with an emphasis on cognition.

She had additional interest in how the brain functions, given that her parents developed cognitive challenges--her mother because of the side effects of chemotherapy and her father because of Parkinsonian dementia.

Truth be told, Curran had already earned a degree in psychology during the late 1980s and worked as an organizational behaviorist in the 1990s--both activities conducted well before her accident that show a heightened interest in how the brain functions.

Based on her education, work experience, family members' needs and her own needs, Curran developed visual exercises to improve brain function and then in 2011 started her blog and business, Cranium Crunches: Brain Based Solutions.

Today I'm taking a bag of clothes to the thrift store.   After six months of trying to maintain a girlish figure, I'm giving up.

But I've Always Been Small!

I'm short--just under five feet tall (apx 152 cm).  I was raised by a single mother, and I was the oldest of her three girls.

I defined my femininity by being petite. I haven't been much for jewelry or make up or manicures. But I was big on weighing as little as possible.

After having children and moving into midlife, I've seen my ideal weight creep up from 102 to 107 to 112.

From what I've read, people don't need to gain weight when they hit midlife. They can exercise, eat right and do a little strength training (weight lifting).

Poet Donald Hall somehow manages to write in a way that is both ornery and lyric.

For decades, Hall published acclaimed poetry.  He even served for a year as the Poet Laureate. Then as he grew older, he found that poetry "abandoned" him.

Since writing is his way of being in the world, Hall began writing essays and publishing them in a variety of venues: The American Scholar, Slice, Playboy, New Letters, and the New Yorker.

I found it delightful to imagine sitting with him in his farm house in New Hampshire.

Hall describes the life of a poet, the women he's loved, his enjoyment of food and smoking, his age-related challenges, and the nature that surrounds him.

And while I would never ask him about his wild, scraggly beard, he does offer a compelling narrative about this beard and two previous ones.

I invite you to "sit" with Hall by reading his essays. Here are the titles of the essays collected here and a couple of quotes from each:

Books on the Dying Process 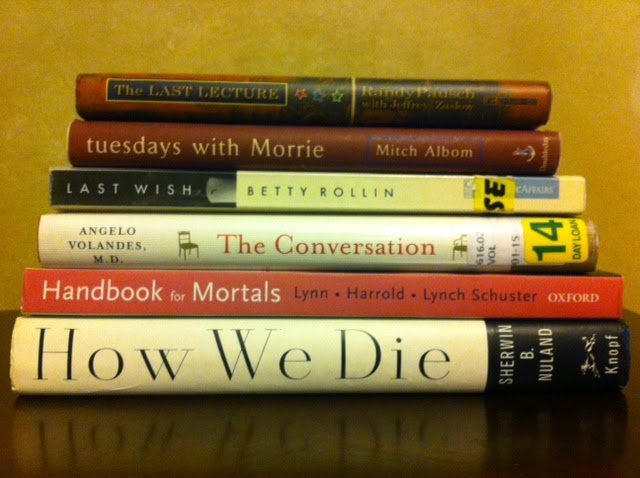 But not everyone thinks about dying.

These books provide an overview of the dying process and its many aspects:
While I am not planning on dying anytime soon, I would like a preview.

It's my habit to research elements of my various life stages as I move through them.

I realize that only a small set of people enjoy poetry (if you discount song lyrics).

And an even smaller set of people enjoy poetry about aging.

Nevertheless, as a retired English teacher now in midlife, I find myself thrilled when I find a poem that explores age-related themes.

Longfellow's unfinished manuscript was found in his desk after his death at age 75.

Here are a few lines from the section entitled "The Last Judgment":