Books on the Art of Diagnosis 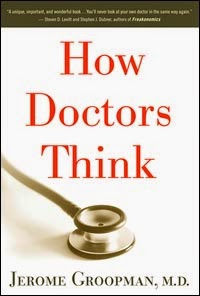 Doctors rely on a variety of academic disciplines to practice the art of medicine. Yes, they draw a great deal on the hard sciences.

However, they also use a measure of psychology, sociology, philosophy and rhetoric in order to take patient histories and persuade patients to follow specific treatment regimes.

They also use interpretive skills when diagnosing. This aspect of medicine interests me a great deal. I've wanted to understand the art of interpreting medical data, and I've found a couple of books that help me with this task.

Jerome Groopman, M.D. published How Doctors Think in 2007. Groopman, an oncologist, draws on his experience as both a doctor and a patient and also shares several anecdotes provided by other doctors.

Granted, projections are just educated guesses, but I find them interesting.  Government programs are particularly interested in the future of aging, so various agencies produce reports from time to time.

Here are some highlights from a May 2014 report An Aging Nation: The Older Population in the United States published by the United States Census Bureau.   The report compares 2012 statistics on age, gender, and race and makes projections to 2030 and 2050.

This report interests me because these are years that I was 50, will be 68 and will be 88 (God willing).  And I'm one of the youngest Baby Boomers, so that will tell you how this large cohort will be aging in the next few decades.

But enough about me. Let's look at some of the report's numbers.

Strokes can happen to people at any age, but they are more common among people as they get older.

Even though stroke is the 5th leading cause of death in the United Stats, that is a reduction from the 3rd leading cause just a decade ago.  Great news!

With immediate treatment (within 1 to 3 hours) followed by rehabilitation (physical therapy, speech therapy and/or occupational therapy) people can survive and recover a great deal of function post stroke.

Here are a few Baby Boomers who suffered strokes and survived.

Know the Signs of Stroke

Stroke is the 5th leading cause of death in the United States, and it's a significant cause of disability for those who survive.

For more statistics about the prevalence of stroke, see the CDC's page.

Note: I am not a doctor.  Please talk to a licensed medical professional about how to reduce your risk for stroke.

In addition to making healthy lifestyle choices, you should be aware of the signs of stroke in order to get medical attention quickly.

Here are some of the common signs of stroke:

Over the last 100 years, Americans have increased their life expectancy significantly.

People used to die much younger from heart disease, cancers and diabetes.  Now medical treatments allow people to avoid these diseases or to live much longer with these diseases.

While not a very cheery topic, looking at rates of death motivates me to work on prevention through healthy lifestyle choices and by seeking regular medical care.

The National Vital Statistics Report lists causes of death in the US during 2010 for a number of age ranges.  The report also breaks down the data by gender and race.

The Old Alchemist: An Elder Tale


I love a good fairy tale. I was reminded of their depth and complexity when my children were small, and I scoured the local library for collections of fairy tales.  After all, literature is equipment for living.

"The Old Alchemist" An Elder Tale from Burma

There once lived an old man who had a beautiful daughter.  She married a handsome young man.  Life soon became difficult for the young couple because the husband spent his days trying to turn dirt into gold.  After the husband spending his inheritance, his young wife struggled to buy food.

Tearfully, she disclosed this problem to her father who exclaimed, "Ah, you don't know this, but I was an alchemist in my youth as well. As your husband to come talk with me."

Expecting to be scolded, the young husband went to visit his father-in-law. Instead, the old man explained,
"I spent much time trying to turn dirt into gold, and I almost accomplished it. I only lacked one ingredient."
Read more »
Posted by Karen D. Austin at 1/07/2015 11:24:00 AM 14 comments:


2014 is "in the can."  Looking back, here are several films released in 2014 that had strong themes about aging or featured mature actors.

On My Way. Catherine Deneuve plays a woman in midlife still trying to put down roots.  Released in the US March 6, 2014 (2013 French film)

Bicycling with Molière.  Two mature actors rehearse The Misanthrope together. Released in the US April 6, 2014 (2013 French film)

Advanced Style.  A documentary about seven fashionable New York women who are 60 plus. Released May 3, 2014

Still Mine.  A couple entering their 80s insist on staying independent.  Released May 6, 2014.

I've been reading Ari Seth Cohen's blog Advanced Style for the last three years.  I was delighted when friends gave me his coffee table book last year for my birthday.

Now his documentary is available on DVD for those who missed it in theaters. The film offers 72 minutes of pure delight.


When I was in my early 40s, I hit the wall after being very achievement oriented. I started practicing yoga and reading zen Buddhist meditations.

During my quest, someone suggested that I read Be Here Now (1971) by Ram Dass. While it was a bit "far out" for me, I did appreciate his alternative views on reality and his focus on consciousness.

The year I turned 50, I discovered his documentary Fierce Grace (2001), which describes the insights he gained and after suffering a stroke in his mid 60s.

Even though a related book was published before his documentary, it took me a few years before I read: Still Here: Embracing Aging, Changing, and Dying. (2000).

Until I turned 50, I had never heard the following words:

Now I have have friends and family members with direct experience with these phenomena of bulging sacs in the intestinal tract.

Risk factors include age, constipation, and a low-fiber diet.

Note: I am not a doctor. If you have any health concerns, please see a licensed medical professional.


Beginners (2010) is a quirky family dramedy, starring Ewan McGregor, who plays Oliver Fields, a 38-year-old graphic artist trying to overcome his grief of losing his mother and then responding to his widower father coming out as gay.
Christopher Plummer earned an Oscar for Best Supporting Actor (and several other awards) for his role as Oliver's father, Hal.

I loved everything about this movie: the characters, the themes, the editing, the screenplay, the setting. It was lovely. Oh, and the dog, Arthur, will steal your heart.

It took me a while to select it from my queue of over 160 films about aging. But last night it popped up on THREE categories of recommended films--Independents, Quirky Romances & Critics' Picks. So I caved and watched it.

This film is based on director/screenplay writer Mike Mills' own experience. Like Oliver, Mills' dad coming out as gay shortly after his wife dies of cancer.

In the present, Oliver meets Anna, a French actress played by Mélanie Laurent.  His relationship with her is interrupted by two sets of flashbacks.

Today marks three years since the launch of this blog, The Generation Above Me.

Here are a few posts of interest:

Over the last year, I wrote more about bone health, insomnia, and spirituality.  I read and reviewed over 30 books on aging.  I also continued to watch a lot of films about aging.

Last week, I noted which posts written in 2014 were most viewed.  But here is a list of the All-Time Top 10 Posts.