Nomadland: Review with a View on Poverty


Having been a fan of Frances McDormand for two decades, I was eager to see her performance as Fern in Nomadland (2020).  She did not disappoint. However, I did not walk away feeling blissful or triumphant. Instead, I was unsettled.

The film is a blend between fact and fiction. The director, Chloe' Zhao, had a lot of people depict themselves in the film, people who are seasonal workers living in in all manner of vehicles--from campers to converted vans.

The film shows Fern, uprooted after the factor closes where she lived in Nevada. She ends up living in a van and working seasonal jobs. She's barely managing to get by, so if she has trouble with her van, her job, or her health, she's poised to lose everything.

Yes, Fern demonstrates industry, creativity, resilience, self-reliance, warmth and compassion. Her character was admirable. However, I kept asking questions about the way the economy in the United States is structured in such a way that laborers like Fern can reach their sixties without savings, equity, or healthcare. 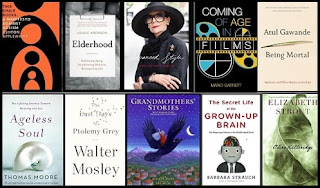 Over the past decade, I have read over 150 books about aging. The topics have ranged from physical to metaphysical with just about everything in between.

For my full list of books read, see this page.

I realize that scrolling through this list is a bit like drinking from a fire hydrant. Consequently, I decided to compile a list of the books that I judge as essential reading for anyone who is aging or anyone supporting another person who is aging.

Top Over the Last 30 Days