Even though I listened to the Beach Boys obsessively during my teens, I have not read anything (until this week) about their lives--which I find incredulous.

But watching Love & Mercy (2015) last Friday was a crash course on the life of Brian Wilson, the primary composer for the group.

Based on Wilson's life Love & Mercy focuses on two time periods: the years surrounding his studio work on Pet Sounds and the years he received treatment under the direction of Dr. Eugene Landy.

Paul Dano plays the younger Brian Wilson, who at a very young age is caught trying to manage a lot of unmanageable forces.

Wilson composes critically acclaimed music while facing a controlling father, crushing fame, pressure from fellow band members, escalating symptoms of undiagnosed mental illness, starting a family when both he and his first wife were very young, and excessive use of drugs and alcohol.

Any one of these pressures would push me to a breaking point. It's no wonder Wilson had trouble coping.

The film doesn't fast forward to the 1980s; it alternates between the early years and later years.

John Cusack plays the midlife Brian Wilson, who just emerged from years of devolving into a bedridden, obese, mentally unsound mess.  Wilson's condition was addressed by Dr. Eugene Levy (Paul Giamatti), who during the a good portion of the 1980s managed every aspect of Wilson's life.

The main conflict of the midlife years involves the viewers scrutinizing Levy's therapy methods through Melinda Ledbetter's eyes (played by Elizabeth Banks). If you keep up with entertainment news, you will know how everything plays out. I didn't, so watching this unfold was quite suspenseful for me.

The film has appeal for viewers of all ages given its themes: the relationship between genius and madness, the role of the artist in society, the temptations of fame and fortune, family drama, trajectories for mental illness symptoms and various responses/treatments for these symptoms. 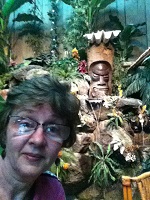 But this film was also a trip down memory lane for me.

Many Boomers carry memories of listening to the Beach Boys, but not all Boomers spent their teenage years in sunny Southern California.

I live in Kansas now, but I just got back from a long weekend trip to the beach cities of Long Beach, Seal Beach, Sunset Beach, and Huntington Beach.

While spending last weekend with Kim, my high school best friend, she suggested that we see the Brian Wilson biopic Love & Mercy.

It was playing in Seal Beach, which was an old haunt of ours. Her sister Kelly drove us in her fancy Mercedes convertible.

Just driving around with them was nostalgic enough to carry me back to my own past.

But watching a film that had flashbacks to the 1960s and 1980s made me feel like a time traveler.

Love & Mercy contains a mash up of many manifestations of Brian: as a child, teen, young adult, midlife adult and even briefly Brian Wilson himself performing as a late life adult.

Being back home while watching this film, I could more vividly see flickering images of my past selves present there in the movie theater--and at the beaches, the bus stops, the malls, the churches, the schools and the fast food joints of my youth. 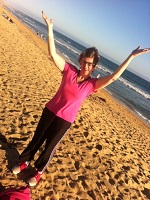