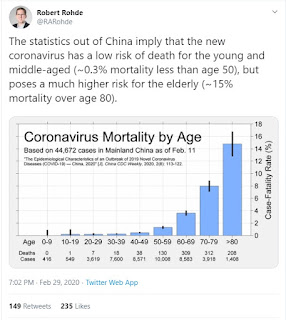 Over the last month, I have been alarmed by how many people downplay the potential impact of COVID-19 aka coronavirus because it "ONLY" affects older adults and those with underlying medical conditions.

The dismissive language comes not only in the comments to the news outlets but within the language of the media as well.

It's disheartening to read hundreds of responses that convey an underlying ageism and ableism.


(I have also read a lot of responses from the rank-and-file that express xenophobia and/or racism. However, others are better equipped at parsing the origins and implications of those forms of prejudice, which are equally abhorrent.)

I'm alarmed that  many feel emboldened to devalue populations of older adults and people with illnesses.


This is one tweet that represents dozens that I have read. I stripped the person's name / handle to protect the guilty. But if you search for "coronovirus only elderly" you will find dozens of such tweets:

Only millions of people fit that description--including most certainly a significant number of this author's family members, friends and coworkers. She herself could acquire an illness that puts her at risk. As people fighting ableism have pointed out, most people are only able-bodied temporarily.

The data emerging from China seems to support that older adults are especially vulnerable. The chart above was shared by Dr. Robert Rohde. His field is actually physics. But the data he shares was generated by CDC.

I haven't seen data about those under 65 living with one or more illnesses such as diabetes and heart disease.  Nevertheless, I have seen push back over the last few days from people living with illnesses, such as this person: 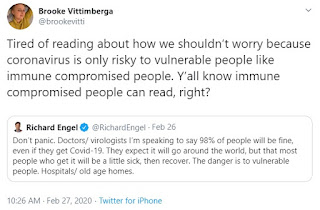 The replies to these tweets include dozens from people living with an illness, pointing out the ableism from well people who gloat with some version of this statement: "Coronavirus doesn't affect me, because I am young and healthy, so calm down. No big deal!"

I have a firm belief in the sanctity of human life. I also recognize that we are interdependent. The poet John Donne expressed this concept in his poem "For Whom The Bell Tolls":


No man [or woman] is an island
entire in itself.

Also, zen Buddhists meditations convey this concept of interdependence repeatedly. And St. Paul talks about the body of Christ and how we all need each other.

On more practical terms, there is the matter of herd immunity and community exposure. The more people who are infected, the more the whole community will be at risk--particularly healthcare workers. I don't have data on this, but there have been several news stories coming out of China about COVID-19 spreading to healthcare workers, some of whom have died.

But again, even if healthcare workers were not affected, the lives of older adults and those living with illness still deserve respect, dignity, and safeguarding of their health by having people of all ages and levels of health working together to protect all. We distinguish ourselves from the animal kingdom by being protective of the vulnerable, not by throwing them to the wolves in a callous manner.

Let's not allow fear to devolve our moral character into a survival of the fittest mentality. Let's rise above base fear and show compassion and concern for all.

Effects of Positive Stereotypes about Aging