For several reasons, I strengthen my core muscles by doing exercises. Every week, I attend three strength training classes, two dance classes, and one yoga class.

Core strength is vital to posture, balance, rising from a seated position, and preventing lower back injury.

A few years ago while living in Wichita, I had a history of poor alignment in my lower back.

I have had my spine adjusted several times.

I finally went to a physical therapist who helped me identify various muscles in my torso (core) and taught me how to strengthen them through several sets of exercises.

I received this guidance from a physical therapist in 2015. My back has not gone out of alignment since then.

Because of my poor bone health, I am very focused on fall prevention.

It's important for people of all ages and levels of health. However, it's especially important to me because I have very frail bones.


I'm 57 years old, but I have the bones of an 87 year old woman, according to my DEXA scan from a couple of years ago.

Consequently, I try to eat a bone healthy diet. I also take a daily vitamin, and I get a Prolia shot every six months.  As mentioned above, I exercise regularly to help with my core strength and balance. I do not want to fall, which would risk breaking my neck, wrist, hips or other vulnerable bones.

(Note: I made a series of poor choices over the years that contributed to poor bone health. I encourage people to improve their bone health through proper diet and exercise. Please consult a licensed health care professional for guidance. I am not qualified to do so. I am only raising awareness of the issues of bone health and fall prevention.)

Earlier this month, I discovered that core was strong enough to prevent me from falling while I pulled another woman up as she was falling down some steps.

On Friday, October 11th, I was helping to provide concessions for the Evansville Fall Festival, sponsored by the West Side Nut Club.

Our congregation owns a food truck where we make and sell Monster Ears (similar to Elephant Ears) as a fundraiser for summer youth camps. This was my fourth fall festival serving as a volunteer.

Because we deep fry the yeast-based dough, the floor near the fryer gets greasy. I wear a set of deck shoes that are water resistant and have a good tread.

At the end of the afternoon shift, we were cleaning up before the evening crew arrived at 5 pm.  I had descended the three or four steps from the food truck in order to place some trash in the can that was on the sidewalk.

Another volunteer headed down the stairs to take empty syrup buckets and a bag of trash. 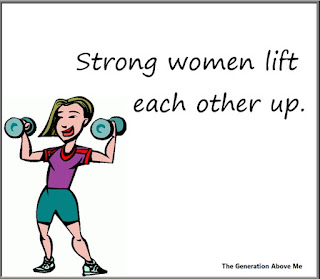 As I was waiting on the sidewalk for her to descend the steps, she lost her footing--due to the grease on the bottom of her shoes.

Because her hands were full, she couldn't catch herself in time, and she fell on her backside. Her head started to fall back towards the threshold of the food truck.

Before I could even think about whether I could lift her up without falling down as well, my right hand shot out.

I bent my knees, and grabbed her left bicep. Then I pulled straight up in order to keep her from hitting her head on the stairs.

First I was relieved that she wasn't seriously hurt. Then I was stunned at the speed of my reflexes and the strength of my legs, core, and arm.

She was a twentysomething woman who was probably four inches taller than I and ten pounds heavier. (I'm not quite 5 feet tall, and I weigh about 118 pounds.)

I am grateful that I was in the right place at the right time and that I had the muscle mass and the reflexes to keep her from hitting her head. Now when my alarm goes off at 4:15 am three days a week, I have extra motivation to attend my 5 am strength training class.

I already prevented falling myself and reduced the severity of someone else's fall--during a (not THAT kind of) fall festival.